Welcome back if you are still reading my ramblings of last years trip...

I will pick up from the campsite in Vence having just dodged the Tour de France, in the Alps above Nice. A couple of my mates were flying down from Holland to meet me for a weeks relaxation in Cannes and I was picking them up at Nice airport.

I'd put about a fair few miles on the car problem free by now and all was going well you could say guess. I was pleased and feeling confident, when suddenly the arse fell out of the seat as I drove down a mountain side road towards the Airport. I could barely see over the steering wheel all of a sudden! The Cav hasn't got standard SRi front seats, I had a set of Ford Escort RS Turbo seats re-trimmed with the correct Cavalier fabric and modded them to bolt in years ago. The Recaro's Ford used have a fault where the support for the bottom cushion gives out after 20 or so years. Mine had picked a great time... I had to pack the gap between the floor and the seat cushion with books, clothes, and old towel and whatever else I could find then put the seat back together. I sat like this for the rest of the trip. It was nasty I will be honest, every bump went through my back some days and I was constantly having to re-adjust it. Cheers only Ford part I have on the car!

Arriving in Cannes I found our hotel and I ditched the Cav securely in their underground multistory carpark. It was tight as hell but the car was safe and I spent a few days hitting the beaches and seeing the sites. Theres a rather famous film festival based here although I can only dream of being able to afford a room when its on!! Cannes is reasonably priced for the South of France, and its got a lot of nice places to eat and drink so I was well at home. A highlight was watching the F1 with a load of Germans in an Irish bar, great banter! The beach is a bit of a let down, but at night if you want glitz, it does it with style with fast cars, awesome yachts and good wine!

Cannes - theres a few hundred millions quids worth of yachts in that view... 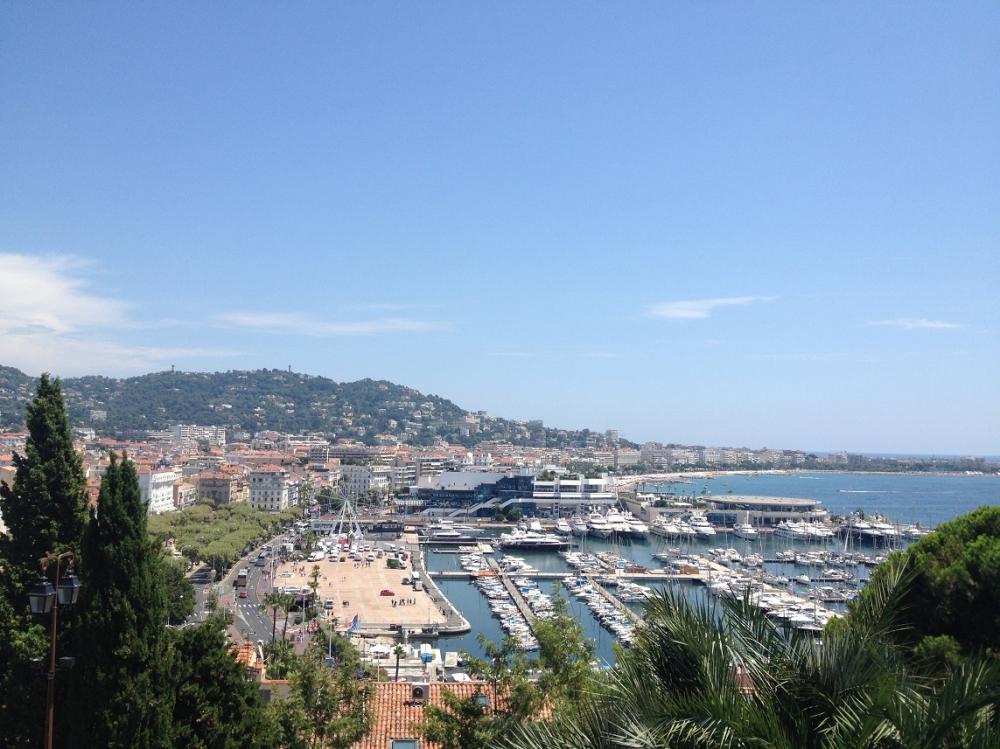 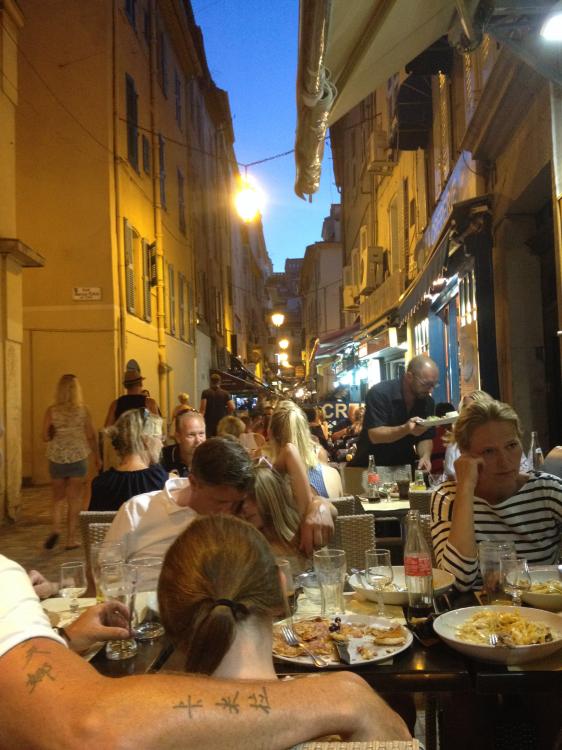 Took a day cruise to Monaco. Left the Cav behind as Monaco traffic is terrible and I didnt fancy it. Its a bit of a dump unless your a mad F1 fan. Which I am. Walked a lap of the place, stood in the tunnel, saw the pit lane and generally and then marvelled at the decadence on display. A Pagani, Ferrari and an Aston parked up randomly in Casino square and €13 pints of beer. Its that sort of place really.

Monaco - The Tunnel. Looking up it so the F1 cars would be coming towards you. Scene of so much F1 history. 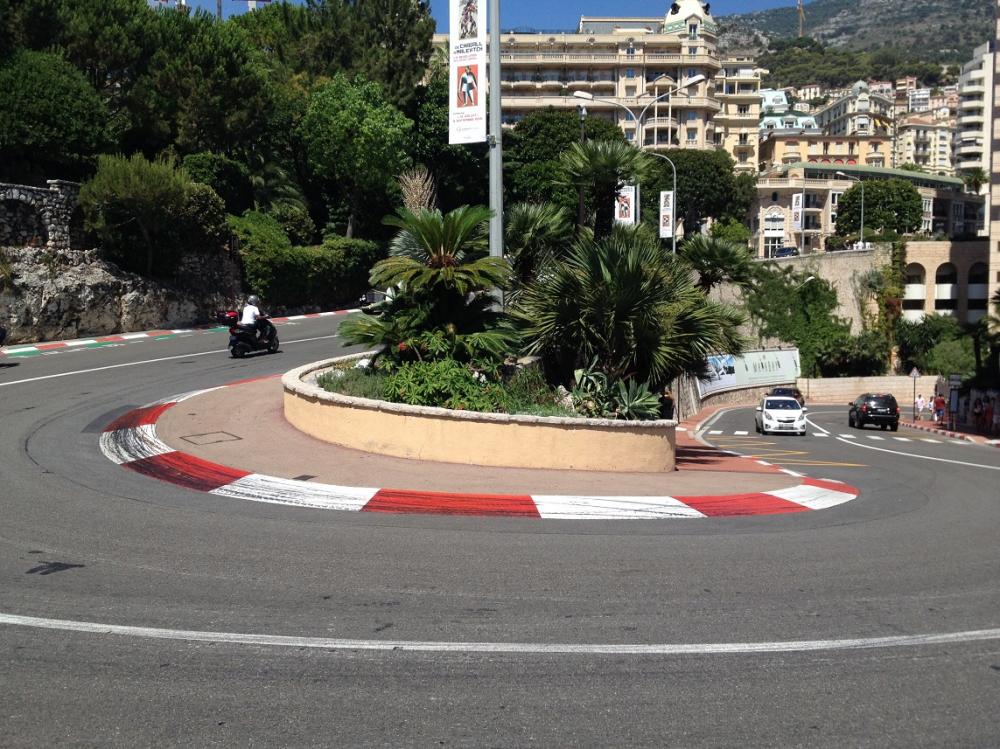 Monaco - the money shot! The go kart track is on the entrance to what is F1 pit lane on race weekend. 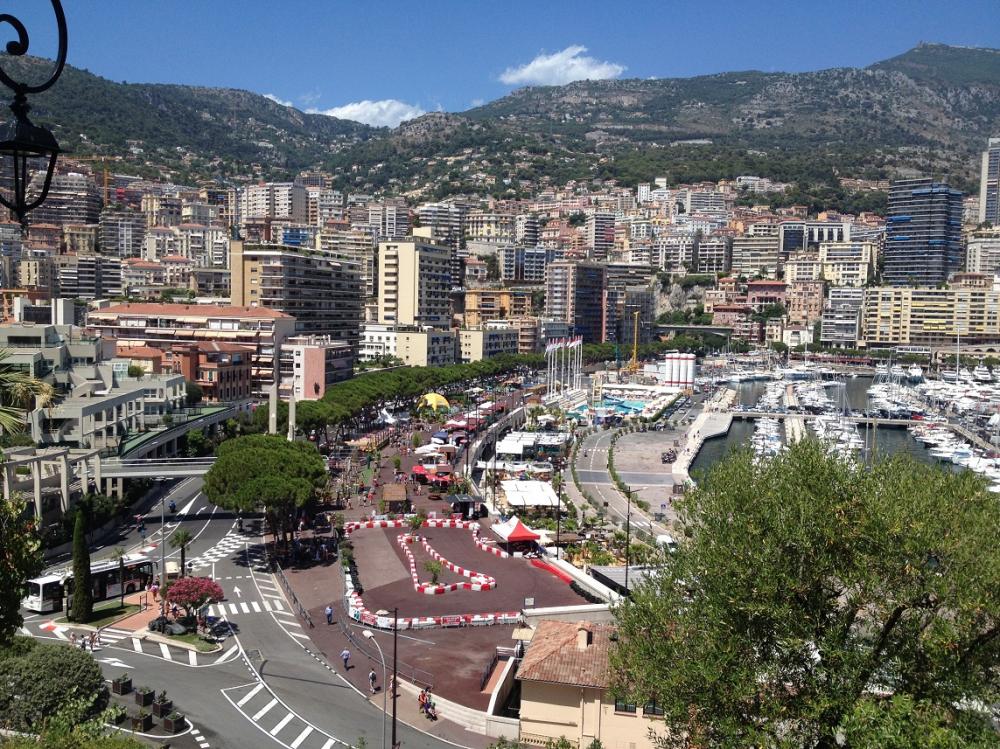 After Monaco I had a few more days in Cannes before we decided one day to head into the hills and find a lake to swim and sunbathe by. Lac de Saint Croix was the best bet so we piled in the Cav and headed up there, via the epic Gorges Verdon. We had a great day in the sun, swimming in the lake, had a BBQ and watched planes come down to collect water to help with a big forest fire that was raging about 30 miles away. 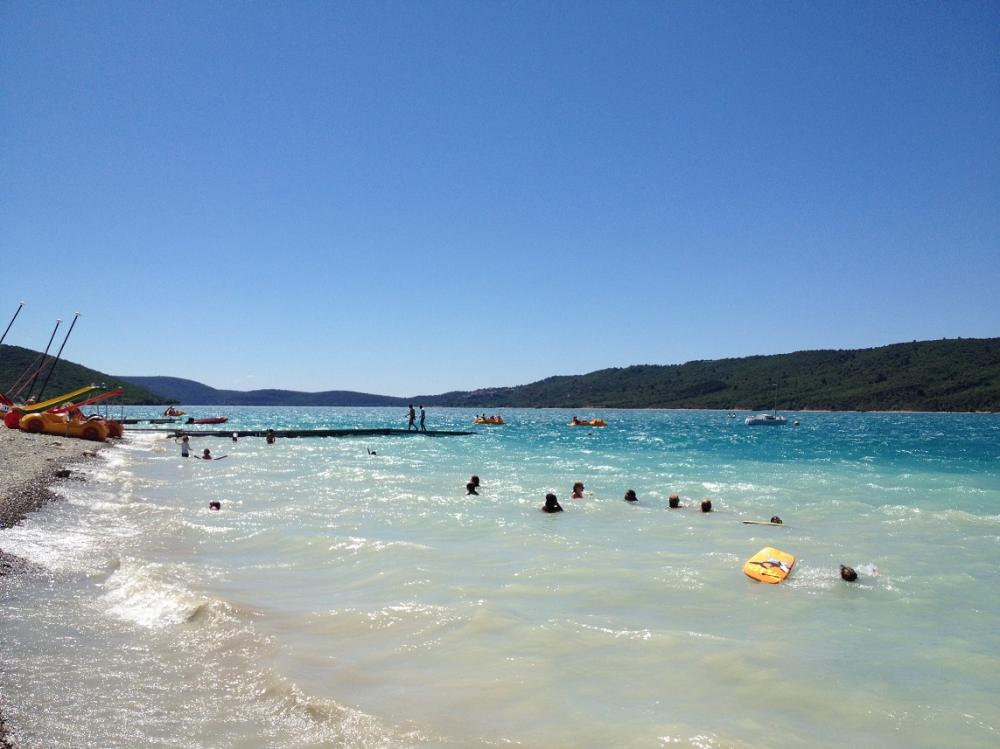 Lac de Saint Croix - Grubs up, my mates cooking as I was driving! 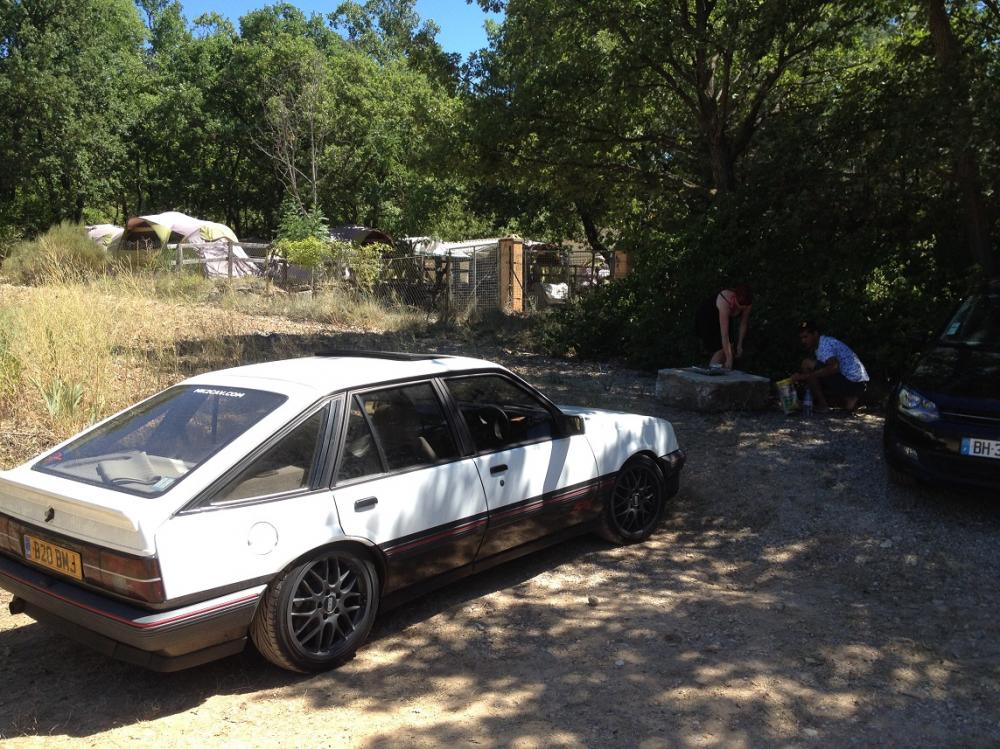 And heres where it all nearly goes tits up!

I broke the car. I say I, because I have to take responsibility for it. but really I think its one of those things when you've modified a car as much as I have this one. Anyway, when Sarah and Jamie (my mates pictured above) arrived I needed to raise the front suspension to stop it scrubbing because of the extra weight of people, and luggage. Thats easy enough with the coilovers and it took me 5 mins. But I failed to account for one thing - the tyre when on full lock now touched the oil cooler pipes under the drivers side chassis leg. Predictably this ended badly!

Oil. Oil everywhere. This is a while after, gravel has been put down to soak up the oil, but you can see the trail and pool around the car still... 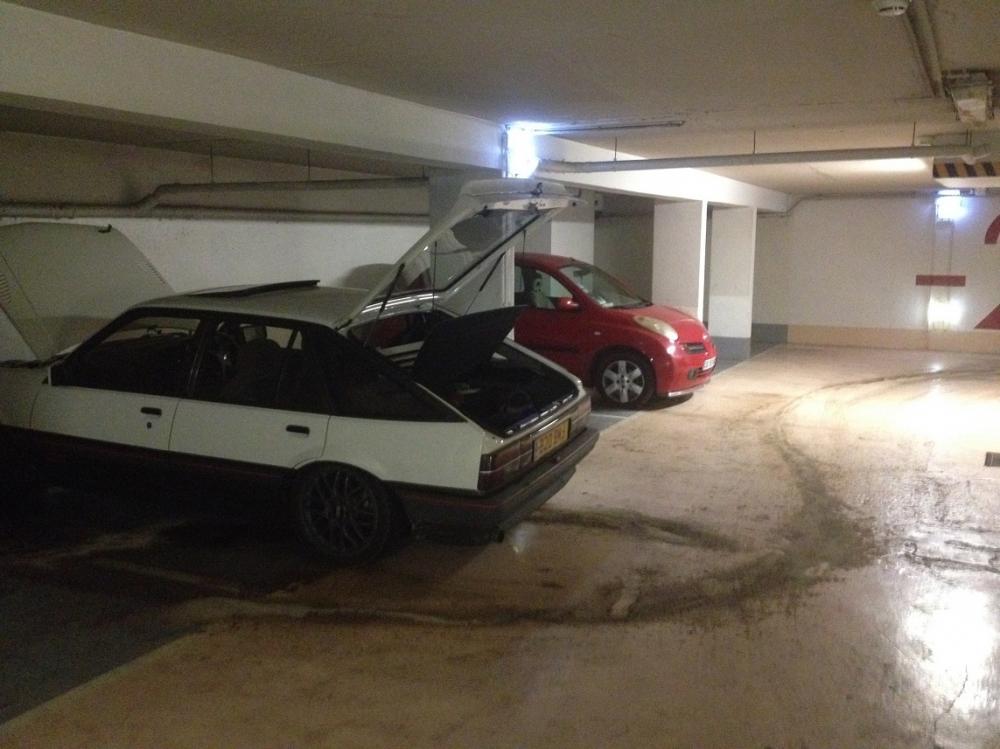 The pipe let go as I turned into the hotels underground carpark which was a sharp left hander taken on full lock. Oil then started spraying out everywhere, unknown to me at this stage while I cruised down not one, but two levels underground to find a parking spot. Then I smelt it. Oil. As I braked to stop the car and see what was what, the front wheels locked up. I stuck my head out of the open window and saw oil spraying through the spokes of the wheel. A glance at the oil pressure light as I rushed to turn the engine off and its flashing like mad. Barry Bad Times has checked into my hotel.
It was a total mess, the Cav sprayed the engine oil onto a gloss painted concrete floor. I'd not only fucked my car up but I turned the hotel car park into an ice rink. Oil carried on coming out and out after I turned the engine of and it left a slick all over the place - and at this stage I was considering the possibility of a massive charge for the mess in the carpark, or the logistics of having a screwed car two levels underground in a tight as **** carpark with a roof height of just 1.8m. I popped the bonnet and confirmed the problem, then pushed the car into a parking bay, confessed at reception and went out into Cannes for some €8 Cider. Lots of €8 Cider.

The next morning I got up, and faced up to the mess and the headache I'd earnt myself trying to get over it at the bar that night! I'd decided to find some oil and some pipe, fix the problem and then fire it up again to see what happened. I foind both at a nearby garage... €45 for 2 meters of 1/2" rubber hose mind! Anyway, the hotel said not to worry about the oil which was really a big surprise the actually said they felt bad that my car was ' so broken and so far from home'.

So I got on with fixing the car... the carpark was like an oven, I have never sweated so much but after an hour it was all sorted, new pipes now safe away from the wheel on full lock. I put oil back in slowly as I'd no idea how much I'd lost, in the end it was about 3 litres but I estimate maybe 1 litre of that came out after I turned the engine off. The moment of truth came when I fired it up, dont mind admitting I was nervous as hell. The top end was noisey for the first few seconds but then it all sounded perfect. A quick spin round the block confirmed I had been a very very lucky man, it was a massive weight of my mind after a stressful 36hrs. If that pipe had gone on the open road.....

The road trip was back on! As a side note, the hotel not only didn't charge me for the mess, they forgot to bill me for the carpark at all... €80 saved!

Mid Repair in the Sauna... 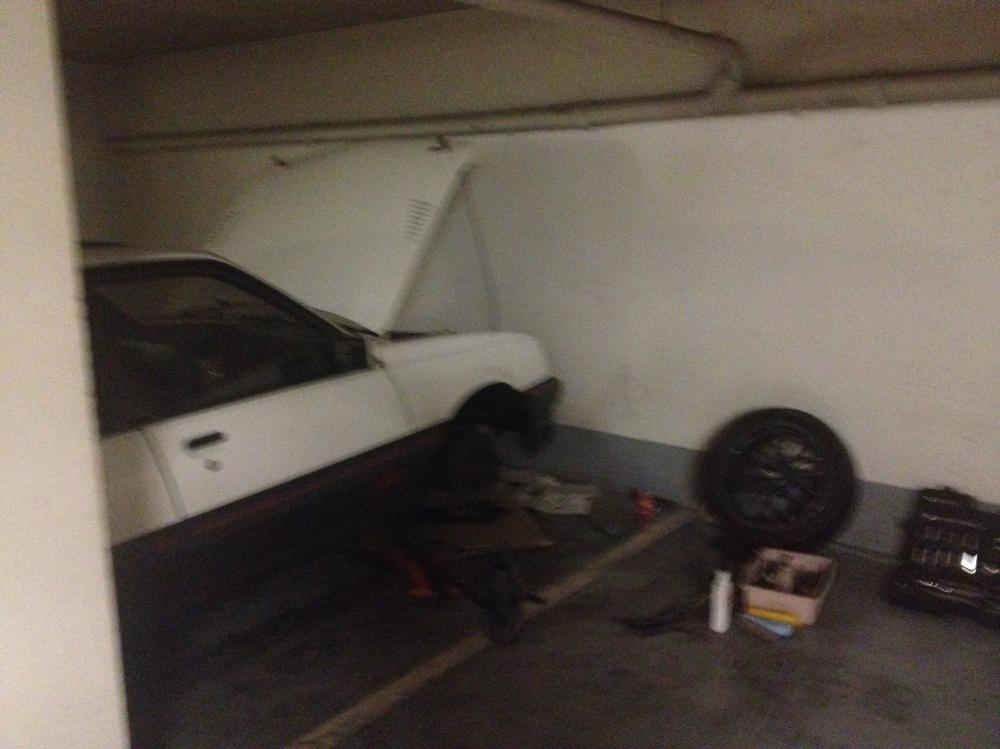 When my two friends headed home, it was back to the Campsite in Vence. I wanted time to drive the car on quiet roads and make sure it was right, before another friend came down to join me for the rest of the trip. I found a local brand of Cider, and enjoyed chilling out in the sunshine. I bled the brakes on the car one day too, they had been horrid and spoungey since Nurburgring and I had my Eezibleed kit in the boot....

Versatile these Cavaliers are, here its a washing line! 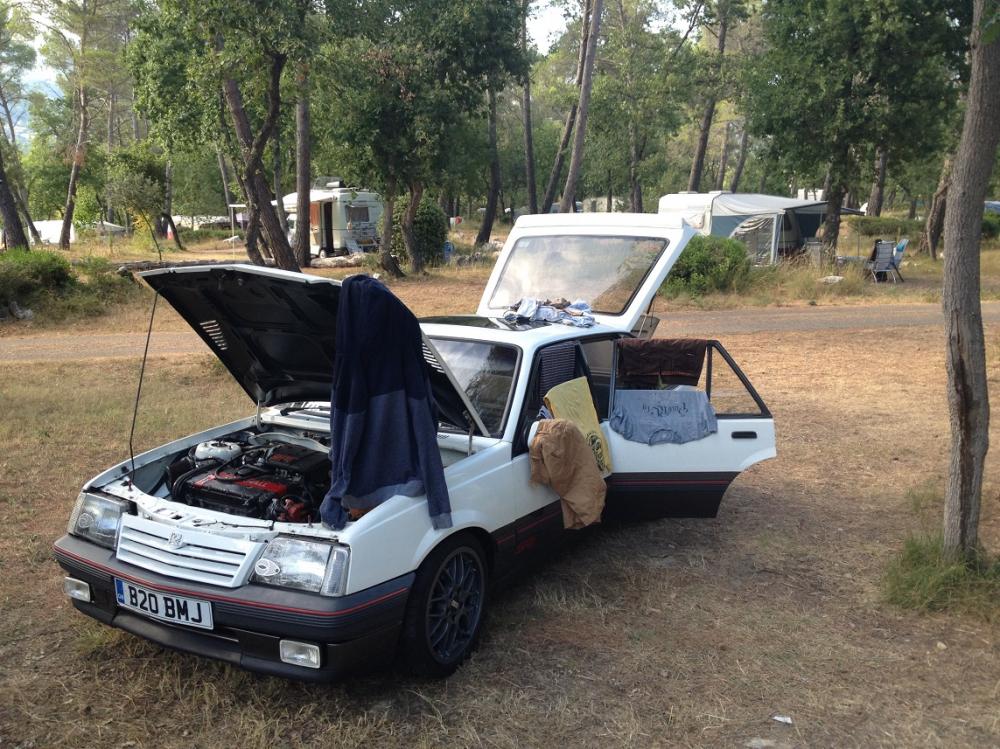 After Vence, we headed to Milan. One of the great European Cities. Great Rip-off cities more like! I didnt warm to the place and was glad we were only there for one night. It took a 3-4 hours to head over from France, through some great tunnels and along some dodgy Itallian Autostrada. Fuel was also massively expensive. I was flashed by a speed camera. I paid €10 for a glass of coke. That sort of place!! That said, the Dumo (central cathedral) is pretty impressive and made from solid white marble. The fashion shops are everywhere, immense and expensive. Another playground for the well off! If you are into Sport, the then Milan has two things - the San Siro stadium and Monza, the home of the Italian Grand Prix. I made a point of seeing them both. 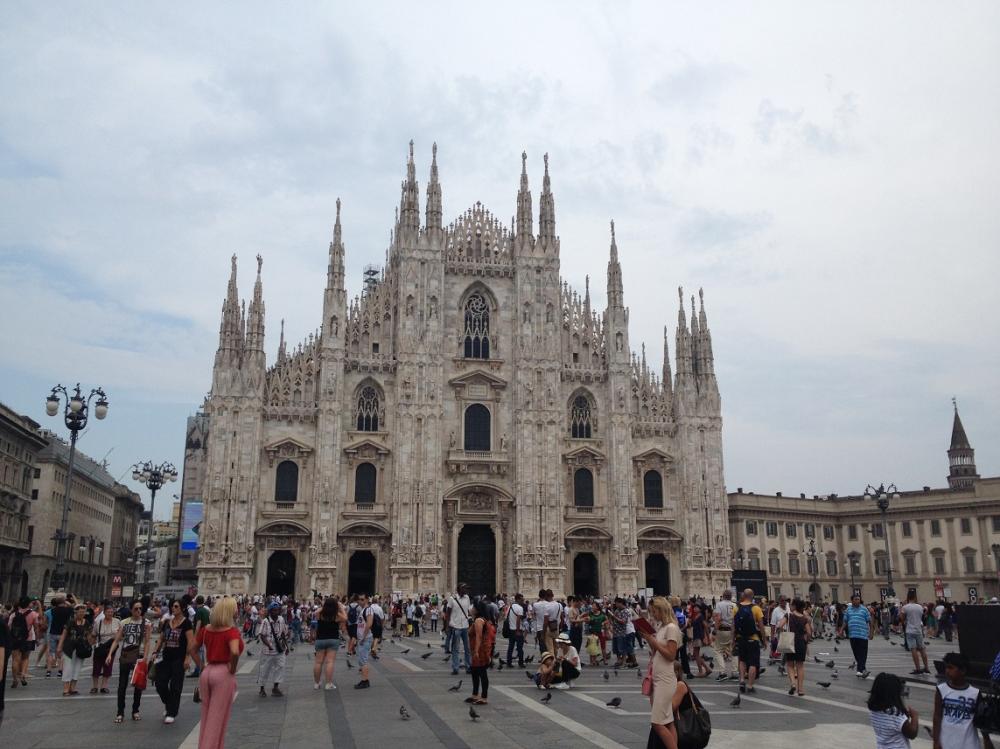 Monza then.... Another world famous race track, home of the legendary banked oval and host each year of the fastest F1 race. Its set in a vast park just outside the city, and of course has a link to the humble Cavalier Mk2 which is known as a Chevrolet Monza in South America. I managed to climb a fence and get onto a restored part of the historic track... its steep. Really really steep - I had to shuffle back down on my backside, you cant walk back down. Honestly, the guts the racers in the 1930's and 50s had to go flat out on this track must have been incredible. Proper modern history infront of me, Fangio, Ascari, Moss, Hawthorne and many more names stand out. The modern track is more sanitised, its still fast. Meeting Italys usual levels of security, I managed to drive the cav through security, take pictures by the entrance sign for the track and then drive into the paddock. Hot laps were on sale!! I nearly wet myself at the though of doing a lap in the Cav, but nope. I can be a passenger in a Jag. Not really the same. A small debate occurred between me and my mate regarding me driving through the unlocked gate onto the track and stealing a lap - Apparently she wasnt going to come bail me out if I was caught. I decided to take her advice this time......

On the banking at historic Monza

This is a popular shot with the South Americans! 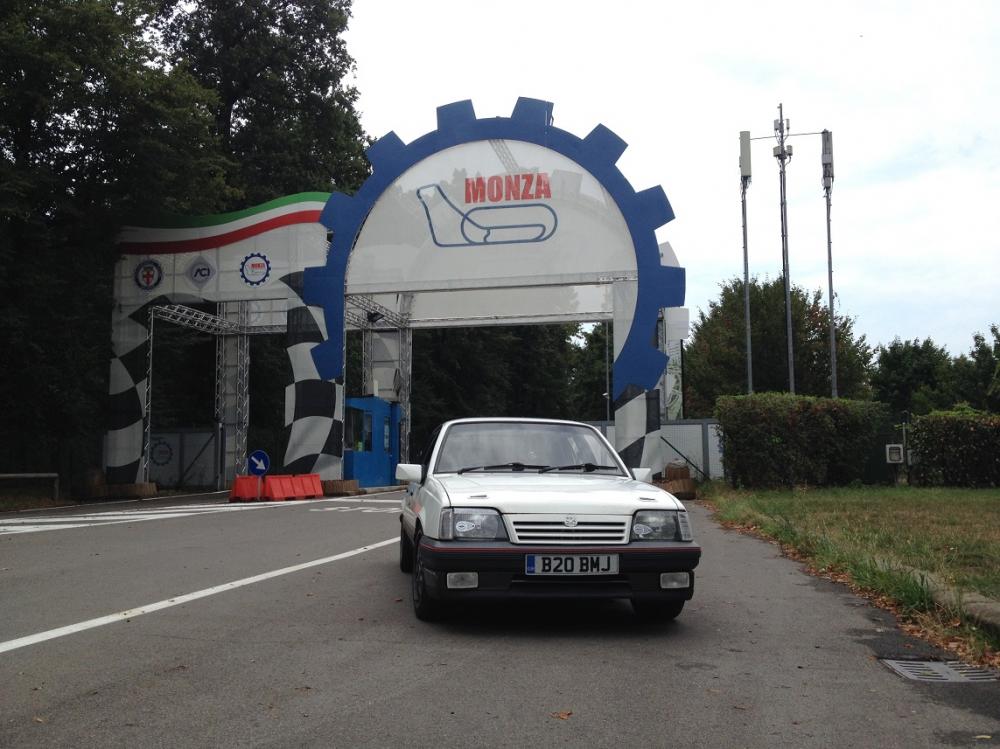 I may not have taken the car on track, but I did hop the fence and get this one looking up the start finish straight! 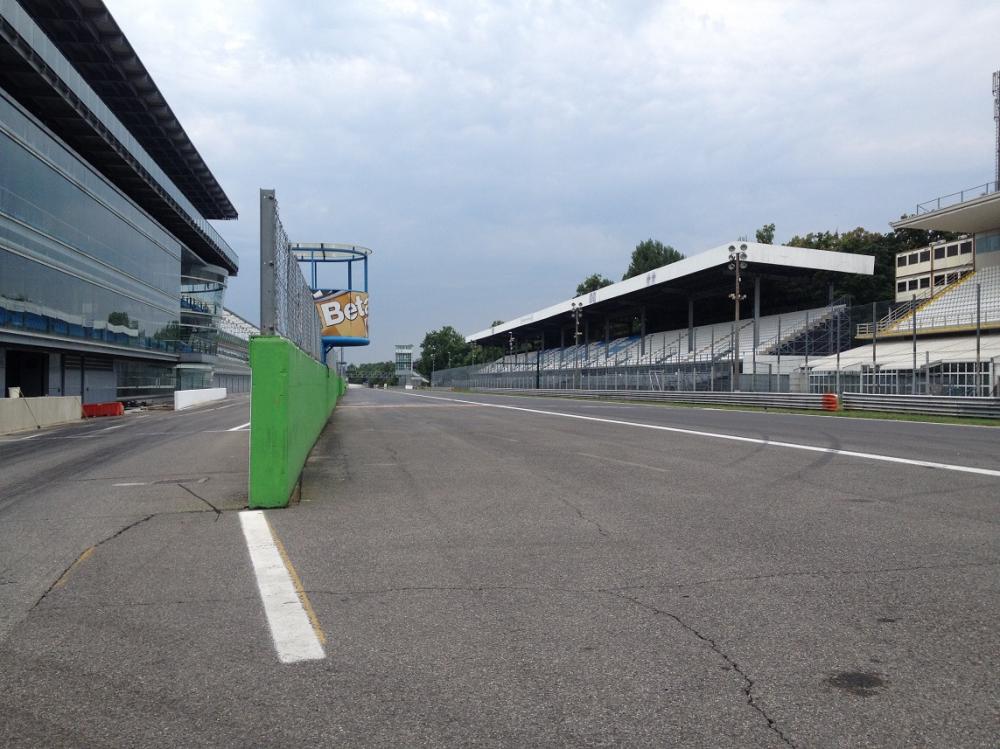 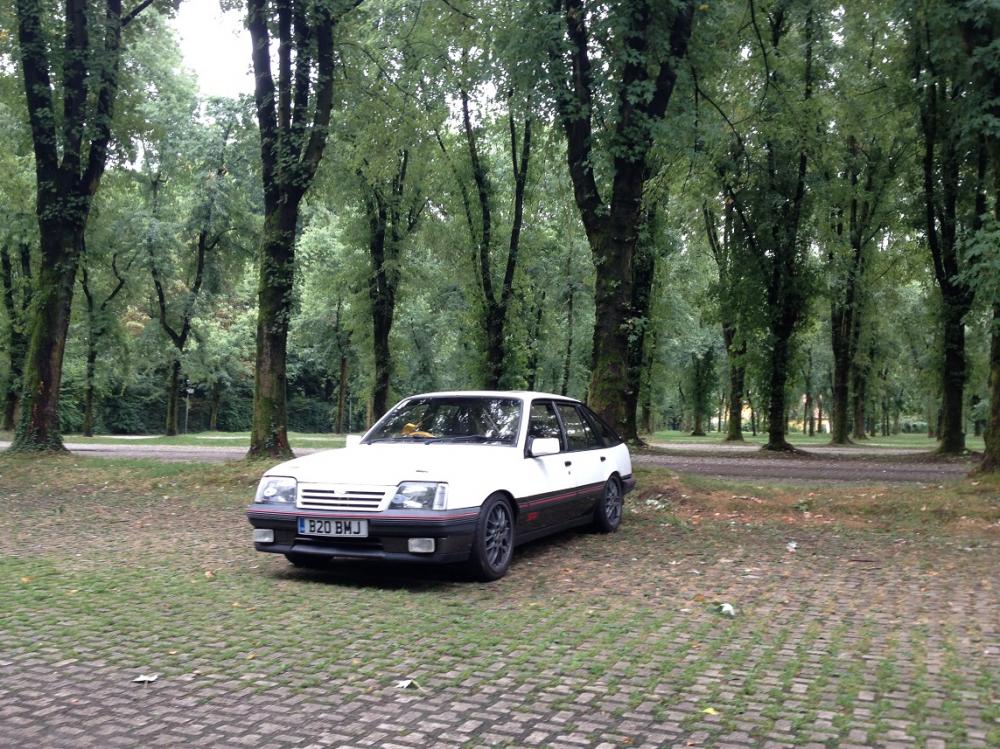 Next in Part 3 - Venice, Munich, Nurburg (erm yeah, again) Amsterdam, Brugge, Spa and home again in a car that will not idle.